Thomas Ferella, who, along with Dave Stone, makes up the BlueStem Jazz leadership, has collected an extensive archive of video, that he’s shot over the last 15 years. Inspired by the work of another video & sound artist, he has assembled a collective of artist-musicians to realize a unique experiential performance–and they’re doing it right here in Madison.

Leveraging the talents of his long-running experimental ensemble, and of Aaron Granat, who lectures in film and communication at the UW-Madison, he calls this MindStorm.

MB: I want to begin with, maybe, some nuts-and-bolts stuff because film is kind-of out of my area of expertise, so maybe Aaron you can help me out. This is happening at the Madison Memorial High School Planetarium. It’s a hemispherical projection screen, right? So there must be a number of different projectors that you use for this?

Aaron Granat: I think they have two built-in projectors–on each side of the screen–and then they have software that will seamlessly merge the two projections together into one cohesive image.

MB: So what do you work on as the film artist for this?

Aaron Granat: Well, Tom has provided me with a massive archive of material that he’s recorded over the last, what, 15 years on his travels in this local community. And he has a really refined aesthetic point of view, and often times he’ll find a really beautiful angle and then just set the camera up and leave it running for 10 minutes at a time. And then he provided me with all that, and then I bring it into my software and I manipulate the footage in ways that will facilitate sort-of blending them together as I sort-of activate them in a live setting. So I’ll – I’ll do an initial sort-of round of transforming the images and then I import them into a DJ performance software called Resolume Avenue, and that allows me to trigger them in real time and also layer them in real-time and play with their temporality and lots of other parameters so that I can create sort-of an improvised way of performing visuals, in harmony with the musical component

MB: So it’s probably less abstract for this particular performance, more image-based. Is that how you might put it?

Aaron Granat: I would say that it’s pretty darn abstract. When I bring images into Premiere Pro, which is my editing software, I am basically trying to, like, break the image into like – it’s almost no longer having a recognizable form, but just, like, into pure abstract colors and shapes and lines and then by the time that – that these images are layered and composited together it – there’s almost no connection to their source material at all. I mean, you can still tell, but it’s, like, one image might be connected to rippling water or something like that. They all sort-of have a connection to their organic natural essence, but in terms of actually, like, seeing a legible or intelligible image that’s – that’s not really what’s happening.

Thomas Ferella: [Laughs] It is not!

Aaron Granat: [Laughs] I wish, yeah we need to work up to that we’re aspiring…

Thomas Ferella: The hell we are.

MB: So, Tom your role in this is the music. Is that right?

Thomas Ferella: Definitely that, but the idea is sort-of my thing. But to be honest I ripped – sort ripped the idea off of Kelon Phil Cohran, and what he did at the Adler Planetarium in 1993. That’s sort-of the genesis of the project, and fortunate that Jeff Holt, who runs the Madison – the planetarium over at Memorial High School, was open to the idea. And so the genesis of this thing was me, and luckily I had this footage and the band, that I play in, in mind. And Jeff Holt just had a really open mind about the whole project.

MB: So you’re collaborating with other musicians to put the music together?

Thomas Ferella: Yes I’ve been playing in this group, and nurturing this group along, for about 25 years. We used to have a studio which – the building got knocked down, so for the last couple years we’ve been playing in different spots. And it’s really just a personal thing for us. Occasionally we step out and will do projects, but the site for our project–the surroundings–are very important to our performance.

MB: Who is involved in this?

Thomas Ferella: Ed Ahrens is on saxophone and guitar, Kevin Schaefer, who’s sort-of my co-leader in this band, is on electronics, synthesizers, percussion. There’s Phil Redman, who’s our newest addition, on bass and electronics. Nick Orlowski on electronics and guitar, and Steve Tyska is on trumpet and violin.

Aaron Granat: And then Tom also plays as well, he’s just as active as the other musicians.

Aaron Granat: And voice. He also vocalizes a lot.

MB: Are you as good as Kahil? [Laughs]

Thomas Ferella: Man that guy is out there, right?

Thomas Ferella: I mean, what an inspiration! So, no, I am not as good as Kahill [Laughs].

MB: So you guys will be performing live at the planetarium?

Thomas Ferella: That’s correct. So it’ll be the six of us performing live and – with Aaron being essentially another musician – but bringing his personal improvisational live performance to the band in a visual sense.

MB: Right, I was going to ask, you know, are you guys working off of each other in some improvisational way? Or is the music driving the film, or is the film driving the music, you know, what’s the relationship?

Aaron Granat: I would say that there’s no real leader necessarily it’s – we’re feeding off of each other constantly. And – I guess the visuals might provide the initial framework, and then sort-of within that – when I notice certain harmonies or correspondences happening I try to strengthen them, or accentuate them in my rhythmic approach to the speed at which the images are unfolding. And any sort of patterns that I notice, that are linking up really productively, I’ll try and make those as apparent as possible, within my means of control.

Thomas Ferella: So this is – Michael, to jump in – the whole thing is not scripted. It is literally walking a tightrope with what everybody’s doing, you know, musically and video. We, of course, have references which are basically our instruments and, in Aaron’s case, it’s video footage and his software. But for the most part it’s just going to take off from there. And as we do this performance – they will not be the same – as we repeat the performance. So it’s an improvisational tightrope.

MB: You know we think of different kinds of improvisation, like some European improvisors that we know about who, you know, they in many ways reject sort-of time and tonality, and things like that. And then we have American improvisors and others who work from a, maybe a different language. What’s your relationship to that sort-of dichotomy?

Thomas Ferella: I think we’re more along – I mean I think Anthony Braxton probably sums it up best for us in terms of keeping the music looking forward, and having that willingness to – to go out there on a limb and just push the artform forward, in the sense that we’re creating in real-time so whatever sort-of emotional state you bring that day is what you’re going to reflect in your music.

MB: And Aaron on the film side, is there a similar kind-of thing going on? I’m not very familiar with improvisational film but can you give us sort-of a point of reference for this?

Aaron Granat: Yeah, I would say that I come from a tradition that is best represented by the avant-garde practices happening in America, starting in, like, the early sixties, and leading up to the current period. If I had to compare it to anyone it would probably be Stan Brakhage who’s the Colorado-based filmmaker, and is known as kind-of the father of abstract expressionist forms of filmmaking, in which he was no longer interested in dealing with, like, denotative material or representational images and – and would use his equipment to try and accentuate the abstract qualities as much as possible. But the new aspect of this is the ability to – to actually generate these forms in a live setting because – and I don’t really know exactly – I don’t have a strong sense of where my practice fits within the overarching landscape of video jockey-ing today. I don’t see a lot of other things similar to what we’re doing. I basically see it as stemming from, like, a handful of visionary avant-garde filmmakers that I grew up watching. And now I use that as a basis of reference for the techniques that I deploy in a live setting.

Thomas Ferella: In our limited research, Michael, we’re not finding anybody doing anything like this. So I think we all come to this with certain, you know, histories and talents, and voices, but when you combine the improvisational music with improvisational film in a planetarium setting, I think we’re on the edge of something here.

MB: So that sounds like a really good reason for the audience to show up and appreciate and enjoy this work that you’re doing. Any other thoughts that you want to relate to the audience to, you know, help them decide to show up?

Thomas Ferella: Well, if they want their minds blown I think..[Laughs]. I mean if they want to see something fresh, and new, and interesting in an unusual setting–I think this is the place for them to be.

MB: And here it is on the west side of Madison, conveniently located within just a couple of miles of downtown.

Aaron Granat: This isn’t your typical weekend fare. Like, this is a special opportunity. And I would just say, like, if it sounds cerebral, then the actual experience is going to be just, like, very psychedelic. And they can sit back and just, like, let the – all of this sensual stimuli just wash over them. And you don’t have to come to it with, like, an advanced theoretical perspective or historical appreciation for the avant-garde.

Thomas Ferella: And it’s a testament to the musicians we’re working with, and Aaron, and Jeff Holt who runs the planetarium. It’s a testament to these folks’ willingness to sort-of breakdown boundaries between art forms. And willingness to open their doors to something that’s new, and potentially risky. So, I mean, I give a lot of credit to the guys I work with in my band–who will walk this tightrope with me–and to Aaron, and especially to Jeff who’s allowing us into this – into his space to perform something that is a completely untraditional planetarium-type of performance.

MB: So it sounds like there are many, many, levels to this collaboration for the audience to appreciate, and benefit from.

Thomas Ferella: We’re really excited to see the interest, and we would love to perform this in other settings. In fact we’ve got something coming up with dancers and this project, which I think will be really interesting also, so I don’t think you’ve heard the end of us. 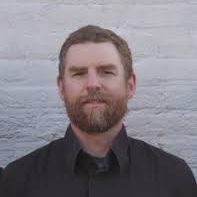